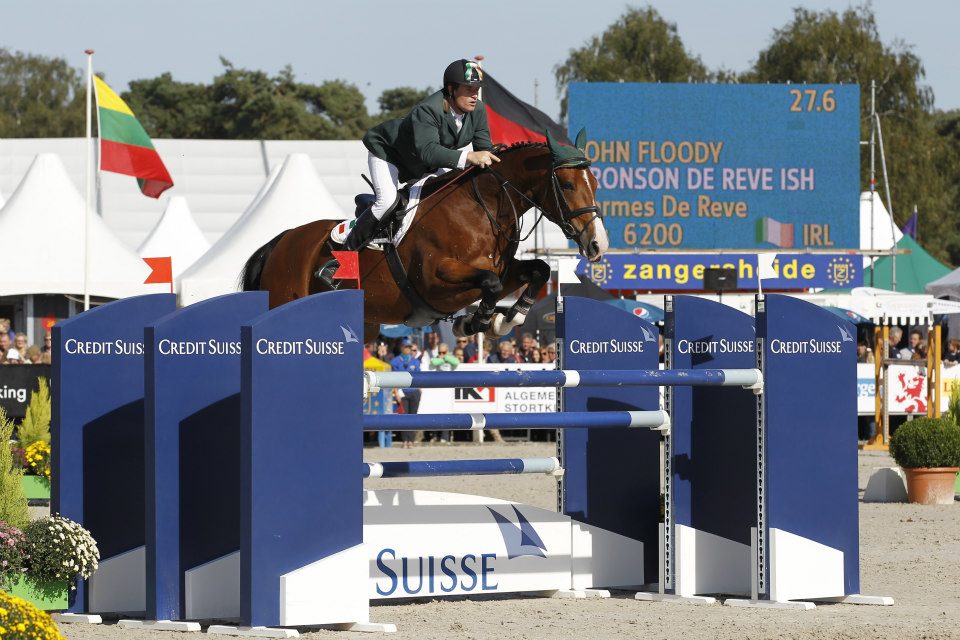 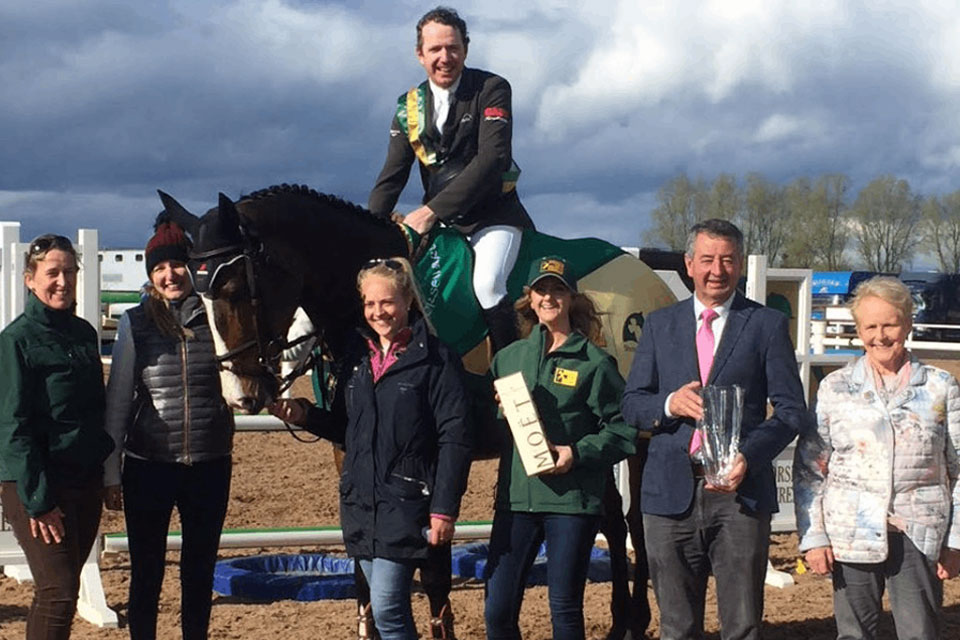 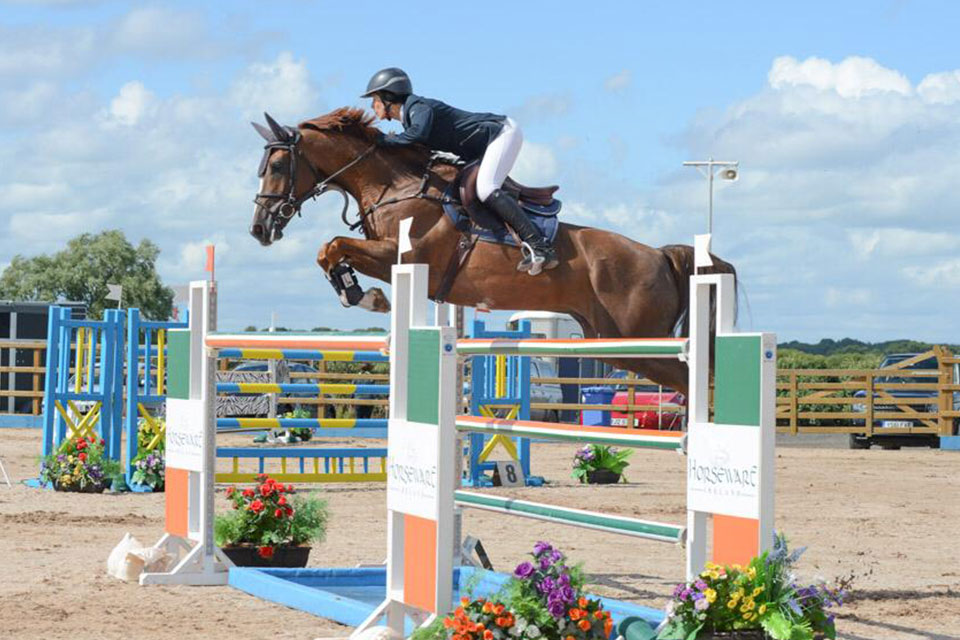 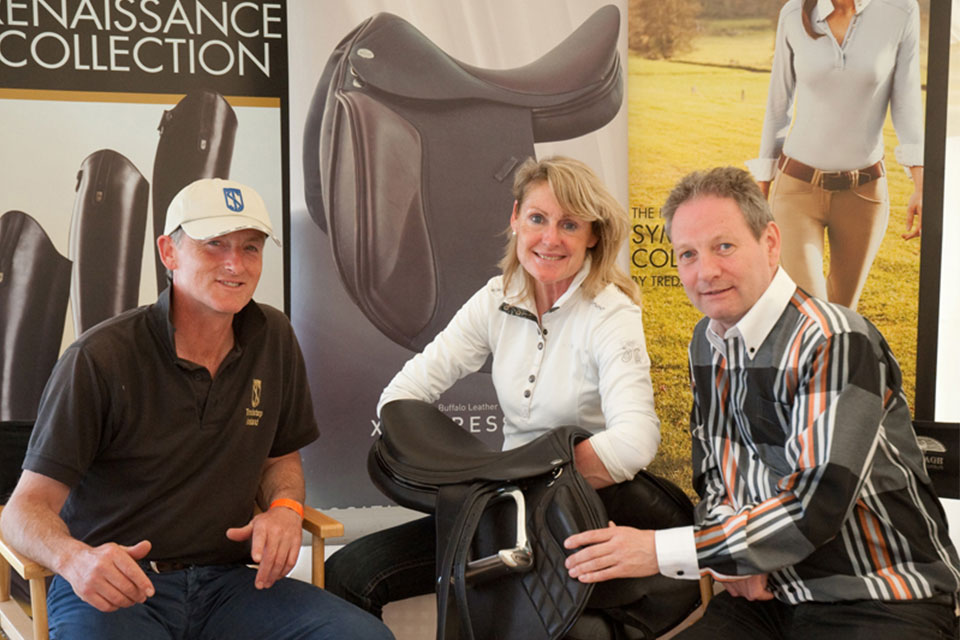 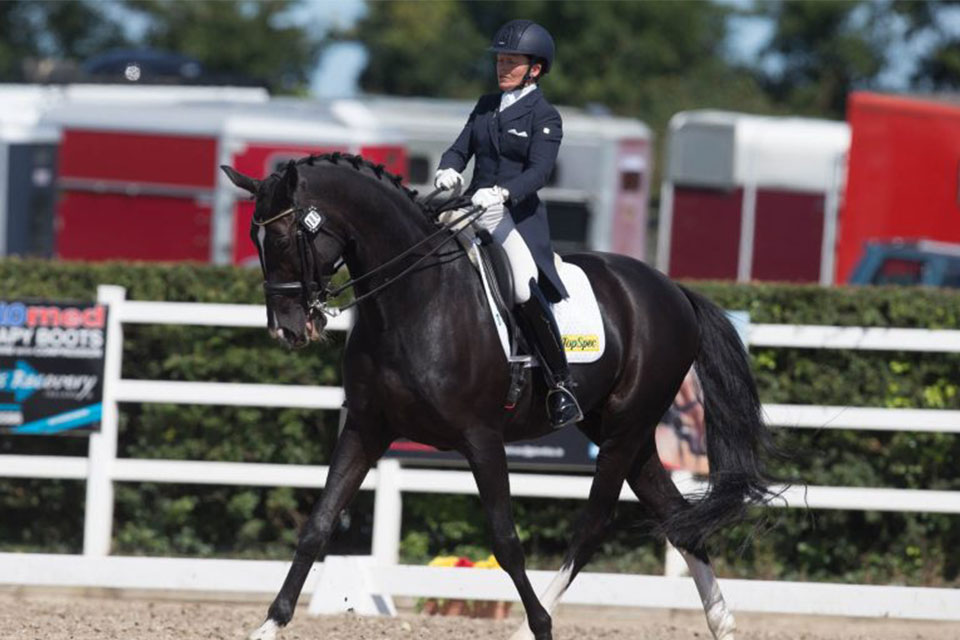 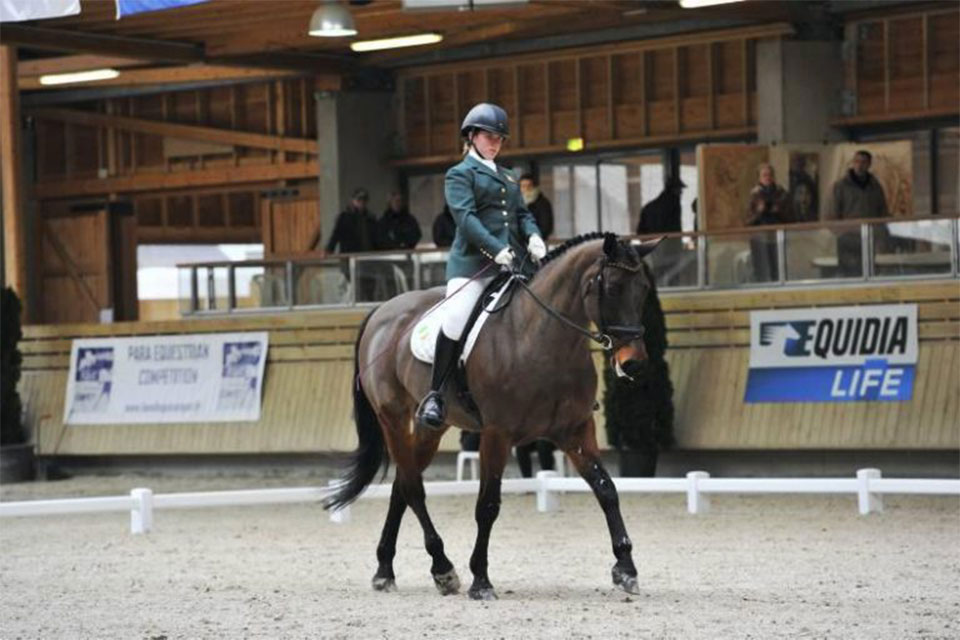 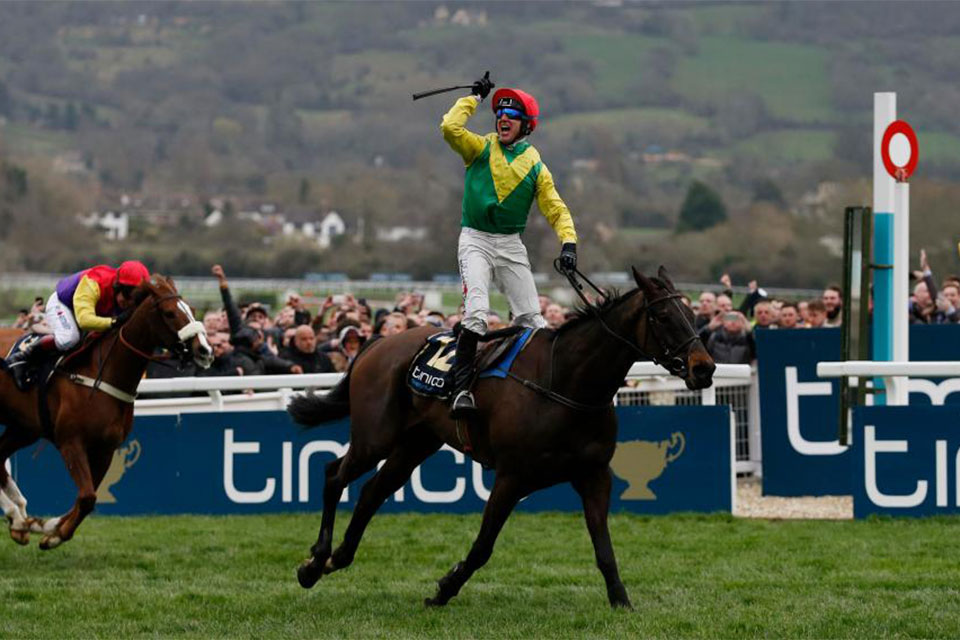 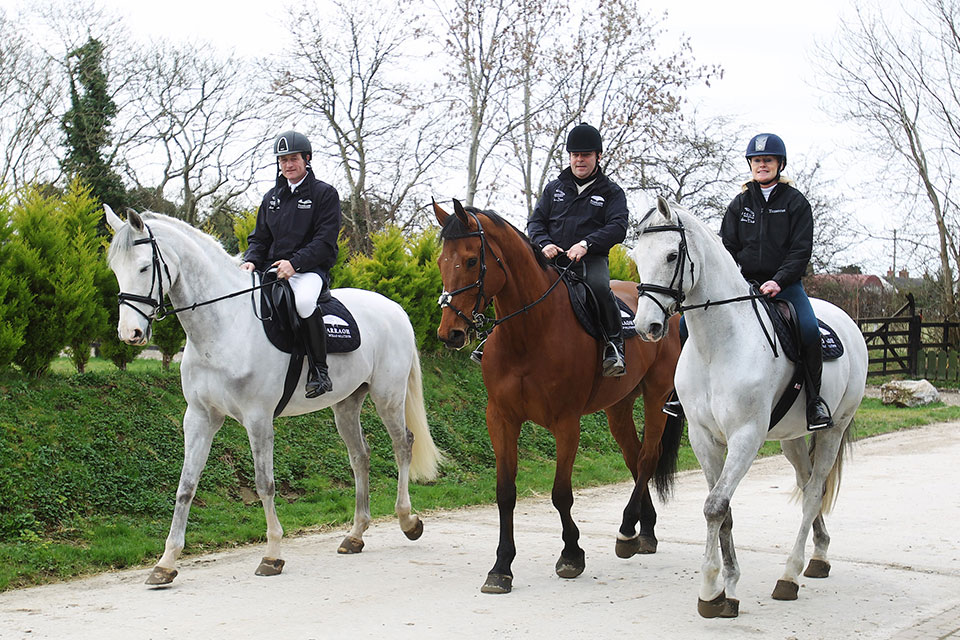 FLOODY GOES ON THE JAG
John Floody has entered in to a sponsorship deal with Jaguar Equestrian, through their distributors in Ireland, Darragh Equestrian Solutions. No stranger to success he partnered Larkhill Cruiser and Ashbourne to clinch both the Chippison Spring Tour and the Autumn Grand Prix series last year.
Larkhill Cruiser has gone on to be very successfully campaigned by Cian O’Connor this year having being produced by John. He also produced some very impressive results last season having being placed in every single Premier Grand Prix on the circuit and winning the Premier in Balmoral. Other successes included winning the international Grand Prix at Tattersalls and both the Derby and the Premier Grand Prix at Cavan.
In addition to those accolades he campaigned well in the Leinster Development League on a number of horses, some of which he hopes to graduate over the next few seasons. He has some nice horses in tow for this coming season and has already claimed two legs of the Chippison Spring Tour so far with PMR Rehy Irish All Star, at the opening round in Kildare and more recently, virtually on home turf, at Broadmeadows, riding PMR Cabellero. Both horses are owned by Paula Rafter.Parallel to these events he has agreed the sponsorship deal with Jaguar Equestrian for the coming season, brokered by Darragh Equestrian.

“I am delighted to have been approached by Darragh Equestrian who are huge supporters of the sport and are well known for their involvement in many initiatives. They have been very attentive and have involved me in all aspects of tailoring the products to meet my needs and for those of my horses. Furthermore, to date I have had a bit of success competing in a Jaguar!! ” says Floody.

“John has been on our radar for some time and in truth we would like to have brought him on board last year but we were committed to another arrangement, which worked well. However this is a new season, we have had several meetings with John and have come up with a formula which we collectively think will work. John is a marvelous rider and not only is he highly competitive, he is also one of the sports true gentlemen. I am confident that he will represent our brands superbly”
Jaguar Equestrian and Harry Dabbs Saddle Ranges are handcrafted in Walsall, England. For over 35 years Harry Dabbs have been the designers and a producer of some of the industry’s leading saddles. They have used the knowledge and experience gained over the years to capture all the features that makes a truly great saddle. All Jaguar Equestrian leather goods bear the Society of Master Saddlers members symbol and personal identification number. 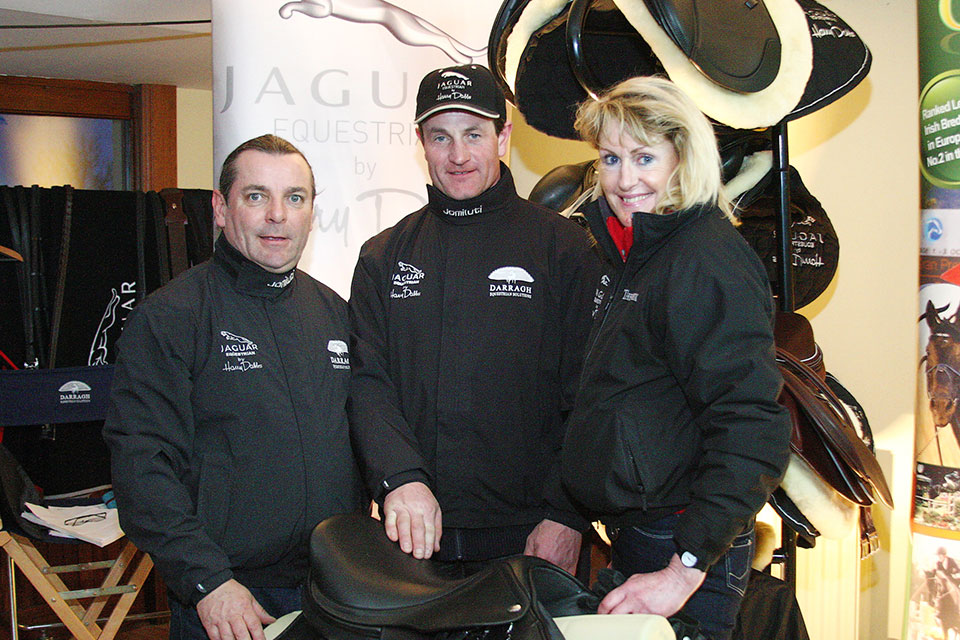 The Thermatex Rug and Accessories Range is another great brand, often copied but never ever equalled, featuring the genuine advanced high performance “wicking” fabric which is manufactured in a unique wool and acrylic blend. Featuring a polypropylene insulating layer with a choice of 22 fabric colours and 19 binding options in all produces technical excellence for today’s horse. 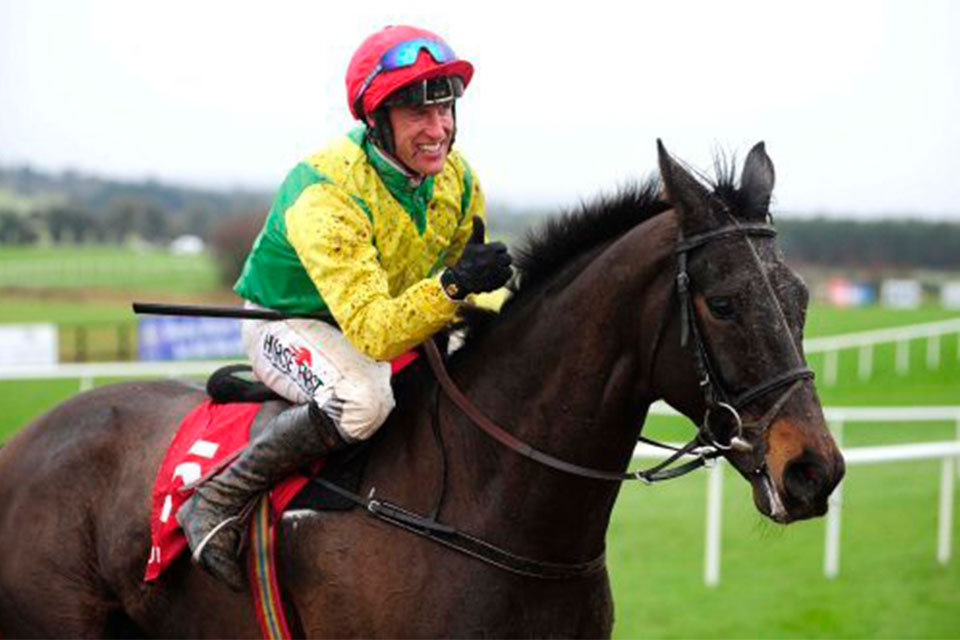 Son of famous show jumper Captain Con Power, Robert Power has long been considered a rock-solid performer in the Irish National Hunt weighing room. He shot to international prominence when winning the Aintree Grand National on Silver Birch in 2007, but both before and after that success, his rate of success on the domestic front has been consistently solid.

“Just in case there was any doubt about the safety of KEP Italia Helmets just look at the protection Robbie Power got at Leopardstown last Saturday when he not only sustained a crashing fall but survived a massive kick to the head. No concussion! Says it all really. KEP Italia Helmets are the best head protection money can buy.”

Prior to becoming one of the top National Hunt jockeys in Ireland, Robbie Power was a very promising show jumper, who won a silver medal at the European Young Rider Championships. His father, Captain Con Power was a member of the Irish team that dominated the Aga Khan Cup in the late ‘70s and rode the legendary stallion Rockbarton. Power senior left the Irish Defence Forces and show jumping to become a racehorse trainer, so his offspring had all the angles covered. Robbie plumped for racing while his sister, Elizabeth is one of Ireland’s most successful eventing riders and it was on her horse, Doonaveeragh O One that he returned to his roots to finish third in the Eventer’s Grand Prix at Hickstead last year. That was fun though. Racing is business although when his boss, Jessica Harrington feels a horse needs something different to help it rediscover its enthusiasm, she invariably gets Power to take it hunting. And on behalf of his sister, he is always on the lookout for an ex-racehourse that might have a future in the eventing world. He was 20 when he returned to racing and rode his first winner on his mother’s mare, Younevertoldme at Punchestown. He worked at Willie Mullins’ yard for a while before getting a job with the Closutton maestro’s equally legendary father, Paddy. Two months after his first winner, he notched up his first success as a conditional jockey for his new boss on Bob What in a valuable Leopardstown handicap. He struck up a relationship with Jessica Harrington the following season and she provided him with a cluster of winners in top races such as the Midlands Grand National at Uttoxeter (Intelligent), the Munster National (Colca Canyon) and the Dr PJ Moriarty Novice Chase (Carrigeen Victor). Power rode Nearly A Moose to win the Galway Plate for Mullins Senior in 2003 and was champion conditional jockey at the end of the 2003/2004 season. Unfortunately though, a broken foot caused him to miss the ride on Newmill when he won the Queen Mother Champion Chase in 2006. The fates decreed that it was his turn to step in when an injured Jason Maguire couldn’t take the mount of Silver Birch in the Aintree Grand National 13 months later and Power showed all his strength in getting Gordon Elliot’s charge home to a famous victory. Since then, his fortunes have continued to improve, becoming Harrington’s retained rider while also picking up plum spares on the likes of Grade 1 specialist, Big Zeb. Most recently, he has been associated with the likes of Bostons Angel, Oscars Well and Steps To Freedom, with the former giving him his first Cheltenham festival success in the 2011 RSA Chase. They return for a crack at the cross-country chase this March. Power rode another Harrington stable-star, Jezki to a bloodless victory in the Paddy Power Future Champions Novice Hurdle at Leopardstown over Christmas and he could represent another opportunity for success in the Cotswolds. 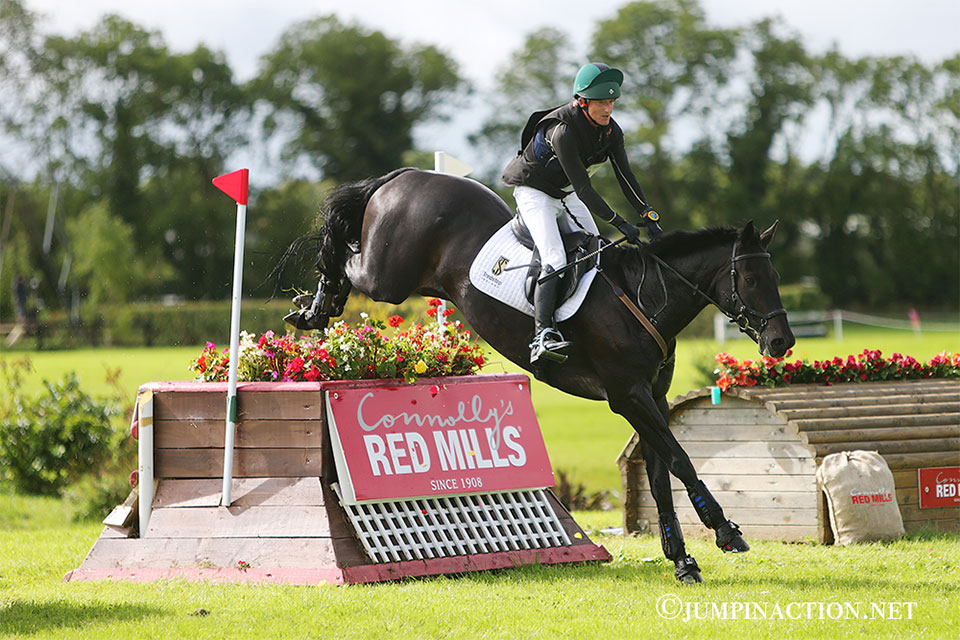 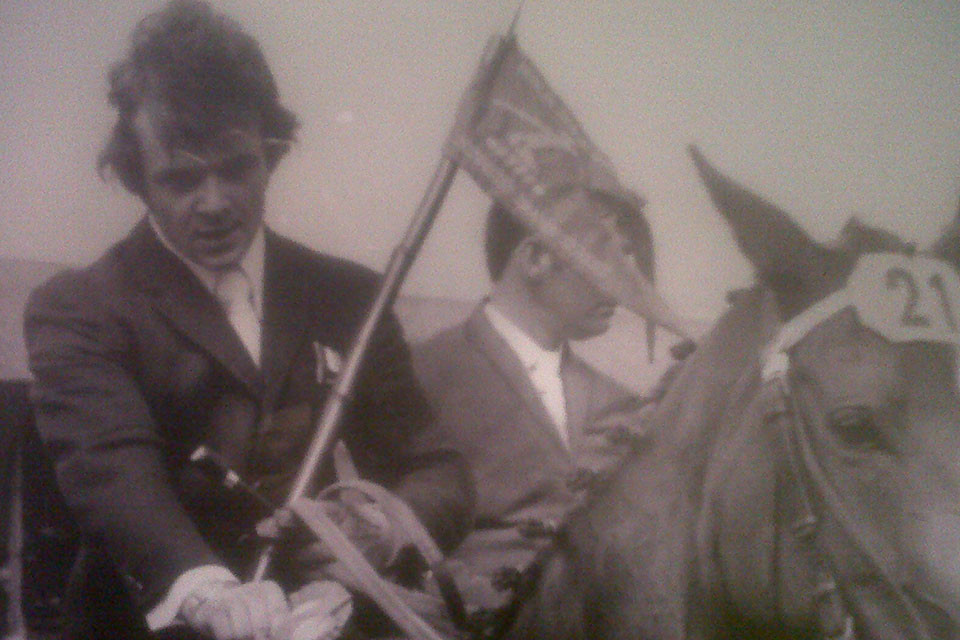 (April 28, 1953 – January 3, 2005)
“Darragh Equestrian Solutions are delighted to welcome Aidan Keogh as one of our sponsored riders. Aidan joined the Darragh riders team in June and will represent our Harry Dabs Platinum saddle range. Aidan is a familiar face in eventing circles, having represented Ireland at the highest level. We are delighted to have such an experienced event rider compete in one of the Harry Dabs Platinum saddles. Aidan first outing in the Harry Dabbs Platinum saddle was Aachen Nations cup. The Irish team finished in sixth place”.

We use cookies to ensure that we give you the best experience on our website. If you continue to use this site we will assume that you are happy with it.Ok